Anyone looking for the perfect selfie has another spot to choose from this winter as Shore Land Arts unveil their latest creation – an over 50-ft long magenta #TOwaterfront sign – to rival the version that stands in Nathan Philips Square.

Commisioned by The Waterfront BIA as part of their winter programming, the bright pink sculpture stands 7-ft high and stretches over 50-ft long in front of the HTO Park urban beach.

Shore Land Arts specialize in creating large outdoor sculptures in scenic locations. Co-founders, Thelia Sanders Shelton and Julie Ryan, are best known for their Canada “150” sign, “Toronto” driftwood sign and the reclining “El Corazon” figure in Humber Bay Shores. Each work has created popular focal points for the community. They build their artwork out of repurposed wood collected from Toronto Island Parks and various construction sites around the city.

“The Waterfront is such a cool area, it’s lovely down there and I really hope that through the sign and Ice Breakers, more people will discover this beautiful neighbourhood for themselves. We like the idea of making something out of nothing – using what is basically just firewood for most people. There’s such a connection made through art because it brings people together from different backgrounds and neighbourhoods for a good experience,” said Julie Ryan, Co-Founder, Shore Land Arts.

The #TOwaterfront sign launches a busy winter season for The Waterfront BIA neighbourhood. The second annual Ice Breakers art exhibit, presented by The Waterfront BIA and produced by Winter Stations, runs from January 19 to February 25, 2018, and features five art installations located on Queens Quay from Harbourfront Centre to the Toronto Music Garden.

Carol Jolly, Executive Director, The Waterfront BIA, said, “We are excited to welcome the #TOwaterfront sign to the water’s edge. The sculpture will act as a focal point for a busy and exciting season of events launching this winter in Toronto’s downtown Waterfront neighbourhood. We are looking forward to seeing some beautiful photography and social media posts with the #TOwaterfront sign as a backdrop.”

By using reclaimed wood from Toronto Island parks, the artists hope to raise awareness of the natural beauty that exists along Toronto’s shoreline and become a part of the artistic eco-system of the city.

“It’s very fitting that the Toronto Island parks operations team was able to supply some of the wood material for the #TOwaterfront sign that we’ll be able to look back on from the Island. All of our wood waste material on the Island is diverted from landfill. It is stockpiled and later ground into wood chips or mulch. Our wood and biomass waste includes flotsam and jetsam raked and collected from the four blue-flag beaches, tree logs and cuttings, flower bed and horticultural cuttings, as well as leaf mass. It was great to see the artists sifting through our wood piles with a keen eye to scope out the perfect pieces that will make up an art piece to be enjoyed by so many. No trees were harmed – just repurposed,” said Warren Hoselton, Acting General Supervisor, City of Toronto, Toronto Island Park.

The sign launches today and will stand until spring 2018.

Unlike most Toronto BIAs, The Waterfront BIA is both a full-service residential area and a tourist destination, ranking second in every major tourist category – domestic and international, pleasure and business, first-time and repeat. Through marketing and promotion, special events, streetscape enhancement, strategic planning and advocacy initiatives, the WBIA continues to secure its position as one of Toronto’s premier destinations. Annual programs include the Waterfront Artisan Market, Redpath Waterfront Festival, Waterfront Singing AmbassadorsTM and Ice Breakers produced by Winter Stations, bringing interactive art installations to the urban waterfront between York Street and Spadina Avenue.

The Waterfront BIA has been the proud recipient of the Toronto Association of Business Improvement Areas (TABIA) Awards in 2011, 2013, 2014, 2015, and 2017, as well as the 2015 Downtown Merit Award from the International Downtown Association (IDA) and the Award of Distinction from the 2016 BIA National Conference Awards.

*City of Toronto average (based on Toronto Census Sub-Division)

About Shore Land Arts
Founded in 2017 by artists Thelia Sanders Shelton and Julie Ryan, Shore Land Arts have gone on to create some of the most iconic works of public art made from natural materials in Toronto. They are best known for their three reclaimed wood sculptures in Humber Bay Shores, a 6ft driftwood ‘Toronto’ sign, a Canada ‘150’ sign and the reclining sculpture “El Corazon”. The waste wood they use is all sourced from Toronto Island Parks and various construction sites across the city. Repurposed, the natural materials take on a new life as a visual hub for waterfront communities.
https://www.facebook.com/shorelandarts/[/vc_column_text][/vc_column][/vc_row] 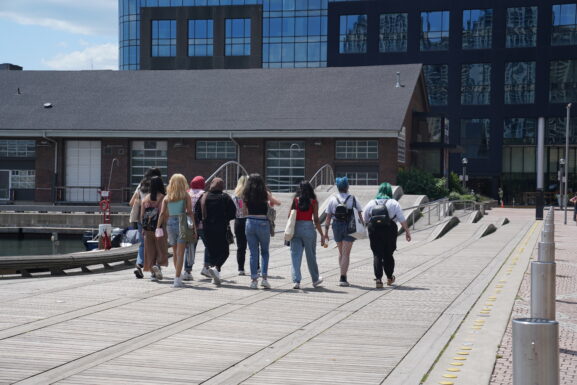 People of the Waterfront: Ice Creamonology

Want to know more about the newest addition to the neighbourhood?   Ice Creamonology is owned by Onur Yilmaz. He