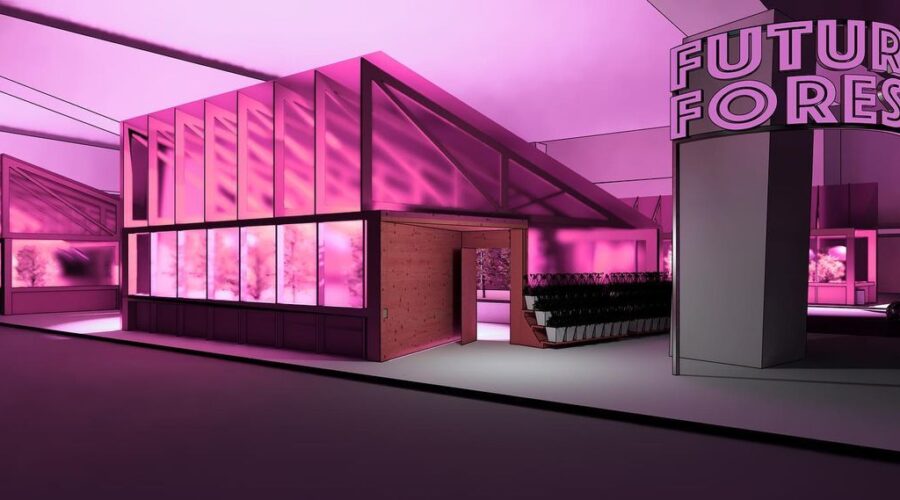 The Bentway, in partnership with the City of Toronto, Waterfront BIA, and Toronto Downtown West BIA, has revealed six proposals for the next phase of Waterfront ReConnect — a project aiming to improve the safety and quality of experiences, particularly for pedestrians, under the Gardiner Expressway. 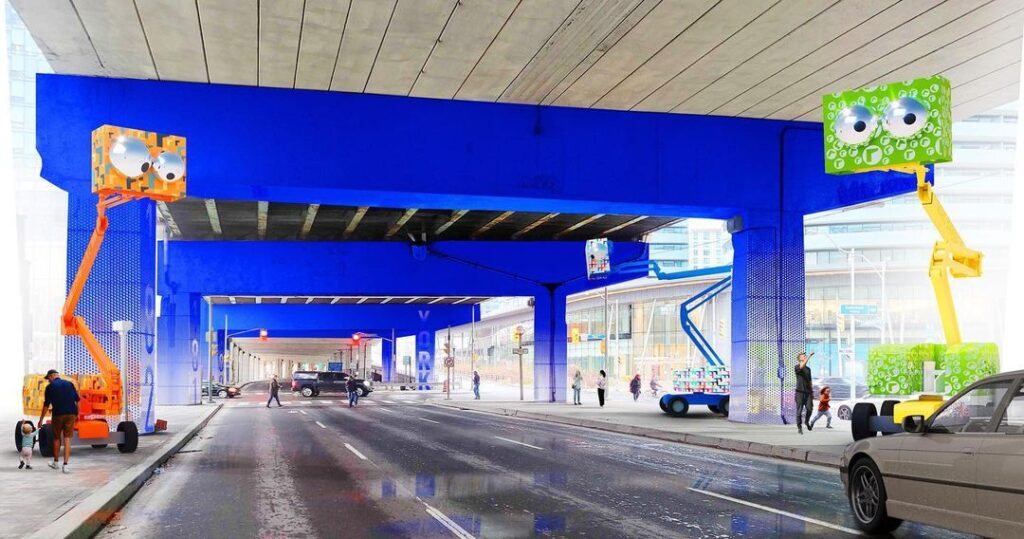 Three shortlisted designs have been proposed for the intersection of Lake Shore Boulevard and York Street, and three for Lake Shore Boulevard and Simcoe Street. The designs are experimental in nature, created by interdisciplinary teams composed of some of Canada’s most innovative architects, designers, engineers, and artists. The public is encouraged to review the proposals online and register feedback by January 19, 2022.

A   jury composed of local and international design and arts professionals will consider this feedback and select one design for each intersection, and the winners will be announced mid-February. The designs will be installed in 2022 and will remain in place until the Gardiner deck rehabilitation project moves to this area of the Expressway (estimated in 2025). 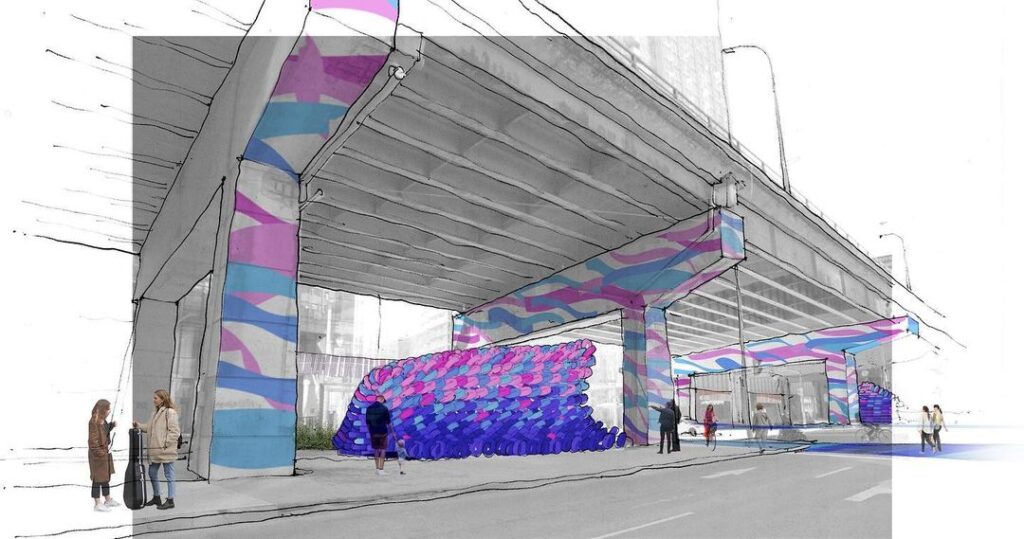 According to The Bentway’s Co-Executive Director, Ilana Altman, “The Gardiner Expressway created a barrier between the city and its waterfront. Waterfront ReConnect addresses this issue by extending The Bentway’s character and innovation to new areas.” She continues, “This project furthers our growing movement to engage the public, enliven public space, and create more welcoming connections, changing how Torontonians perceive and experience the public realm underneath the Gardiner Expressway.” 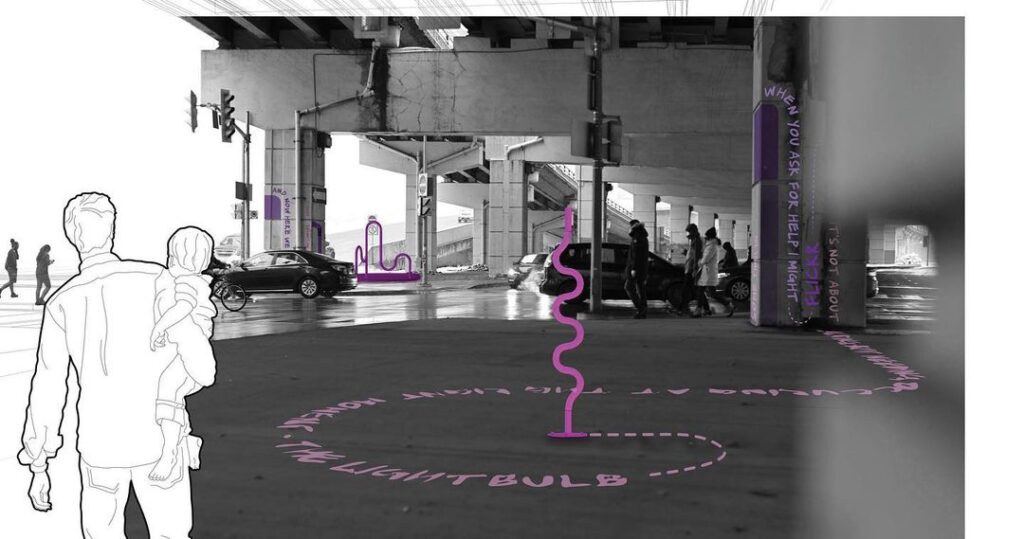 For the York Street intersection, the shortlisted proposals are: 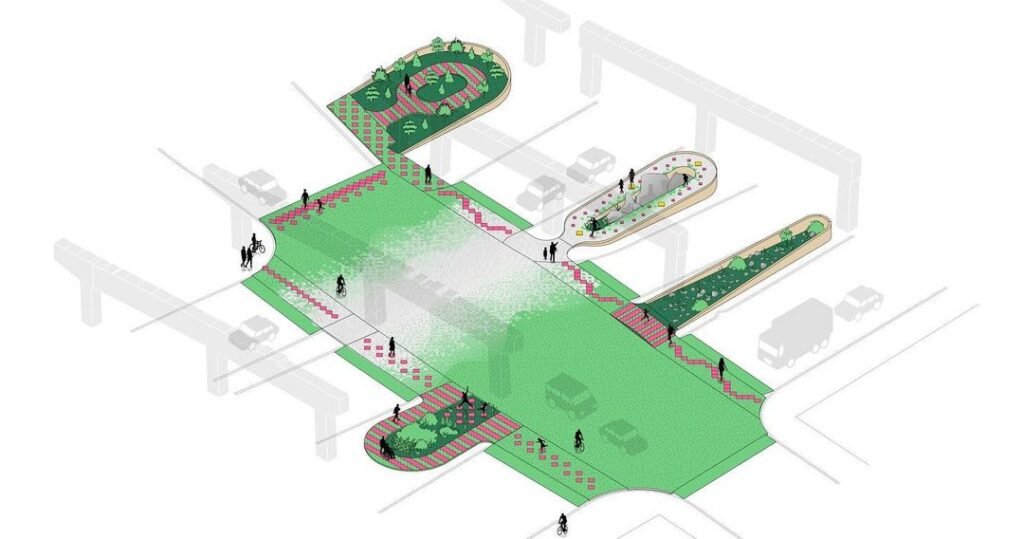 For the Simcoe Street intersection, the shortlisted proposals are:

“The north-south connections to Lake Ontario are crucial to supporting a world-class waterfront experience. The Waterfront ReConnect project will help create uplifting spaces for the communities that reside along Lake Shore Boulevard, and welcoming gateways for the millions of people who visit the waterfront each year,” says Tim Kocur, Executive Director of the Waterfront BIA. 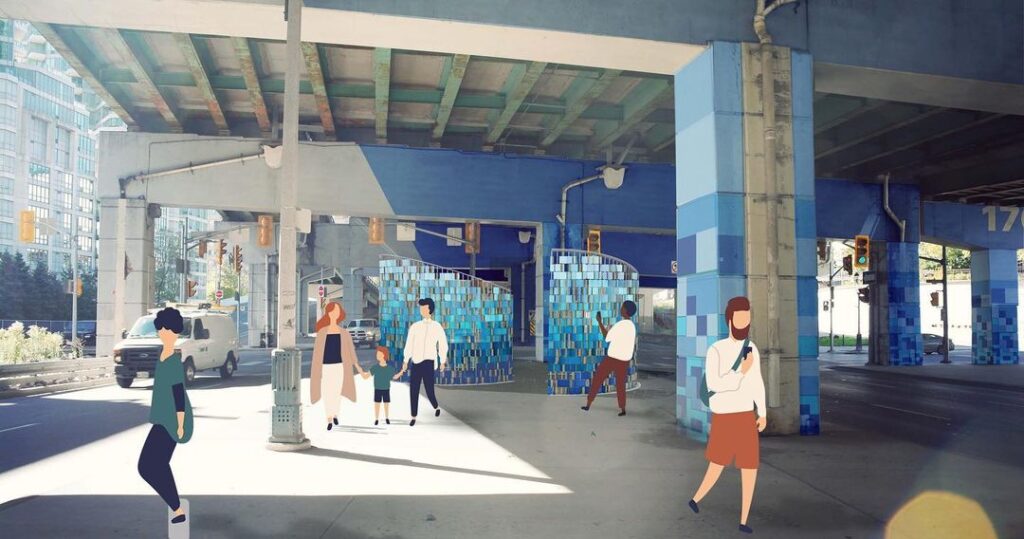 Between January 5 and January 19, everyone is encouraged to explore the proposals and share their feedback by email or through an online survey, which will help inform future Bentway programming and design initiatives that advance the continued transformation of the under-Gardiner corridor.

This phase of Waterfront ReConnect is presented by The Bentway, the City of Toronto, the Waterfront BIA, and the Toronto Downtown West BIA, with special thanks to

DiamondCorp, Lifetime Developments, and The Bentway’s growing family of friends and supporters.

The Bentway re-imagines how we build, experience, activate, and value public space together. Of the city; about the city; for the city.

The Bentway Conservancy is an independent charity, a not-for-profit powered by vital partnerships with the City of Toronto, residents, supporters, artists, creatives, city-builders, and dreamers.

Our work is anchored by a new and growing site located under Toronto’s Gardiner Expressway, which we operate, maintain, and program as a platform for creative practice, public art, and connected urban life. As a new model for public space in Toronto and a forum for social engagement, The Bentway continues to evolve amidst the changing landscape of the city, developing opportunities and partnerships that address the key issues of our time.

About the City of Toronto

Toronto is home to more than 2.9 million people whose diversity and experiences make this great city Canada’s leading economic engine and one of the world’s most diverse and livable cities. As the fourth largest city in North America, Toronto is a global leader in technology, finance, film, music, culture and innovation, and consistently places at the top of international rankings due to investments championed by its government, residents and businesses.

Activities of the WBIA include representing the area on key policy and advocacy issues, making targeted public realm improvements, and highlighting the area’s vibrancy with activations and daily promotion online.

Since its establishment in 2008, the Toronto Entertainment District along with the area west from Spadina Ave. to Bathurst St. has experienced a significant transformation. A name change to Toronto Downtown West BIA provides the BIA with a more inclusive representation of the business members.

The Toronto Downtown West BIA’s mandate is to promote, improve and preserve this dynamic area of Toronto. Benefitting from economic, environmental, and social factors driving downtown growth, the Downtown West has established itself as a thriving and vibrant district for living, creating, working, and entertainment.

“We believe that Nordic Bridges is a way to bring people back together, not only by building bridges with our 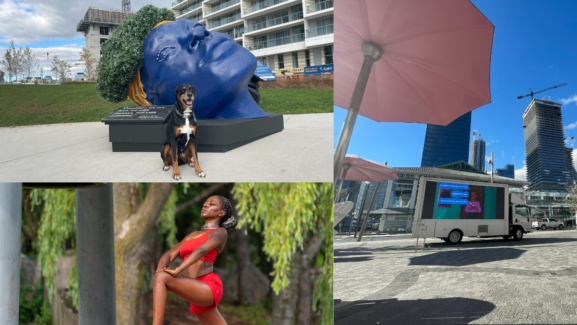 The waterfront has loved hosting the first ever Waterfront Artists in Residence, the Black Speculative Arts Movement (BSAM) Canada, for