This will be Gilbert Vesleño’s 22nd summer working on Toronto’s waterfront with Toronto Harbour Tours. He started as a summer worker while attending Toronto Metropolitan University, and aside from a few sabbaticals for travelling – and work delays for both SARS and COVID – he’s been here every summer since.

Toronto Harbour Tours can be found at 145 Queens Quay West. 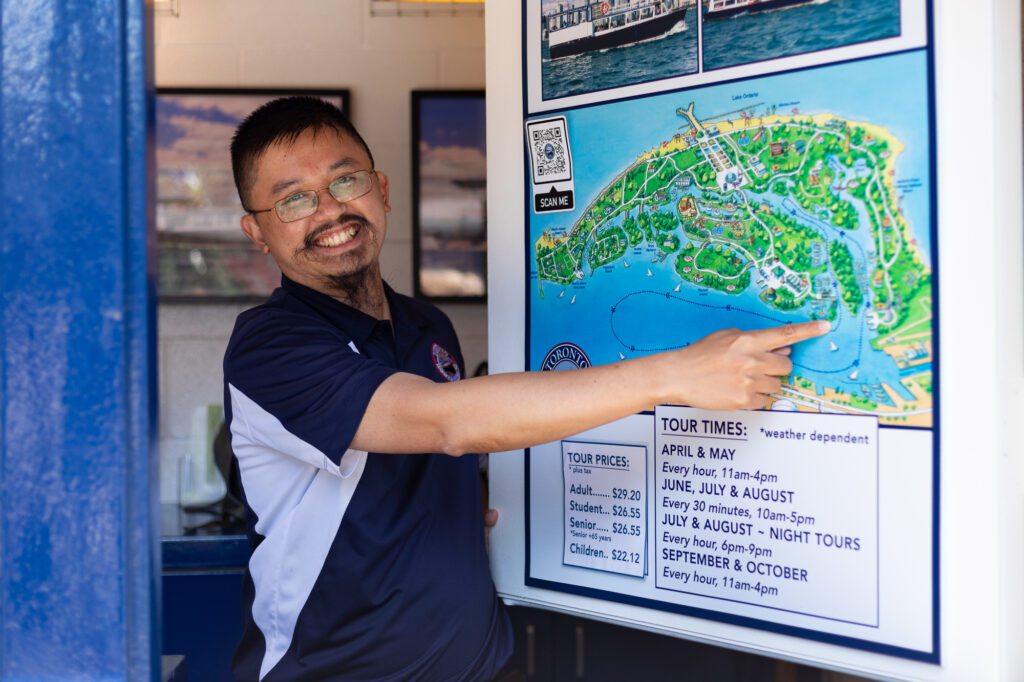 You’re a regular on the waterfront each summer. What do you do each day, Gilbert?

I’m an assistant sales manager with Toronto Harbour Tours and we provide boat tours of the harbour, water taxis to the Toronto Islands and charter boats anywhere around the inner harbour.

My main role is sharing tourist information and I’m usually standing in our lighthouse booth out front at York and Queens Quay. I answer hundreds of questions a day from tourists and visitors about our services and boat tours, but also about the City, where to go, what to see, and where to eat. I get a lot of questions like, “I’m here for a few hours on a layover, what should I do?”

Part of the reason I’ve fallen into this role is that I can speak seven different languages.

You speak how many languages!?!?

English, French, Spanish, Filipino and American Sign Language. I can also get by in Portuguese and Italian by cross-referencing other languages. I’ve actually heard my tour advice translated so many times to Italians by their family members that I can now explain it all in Italian itself. 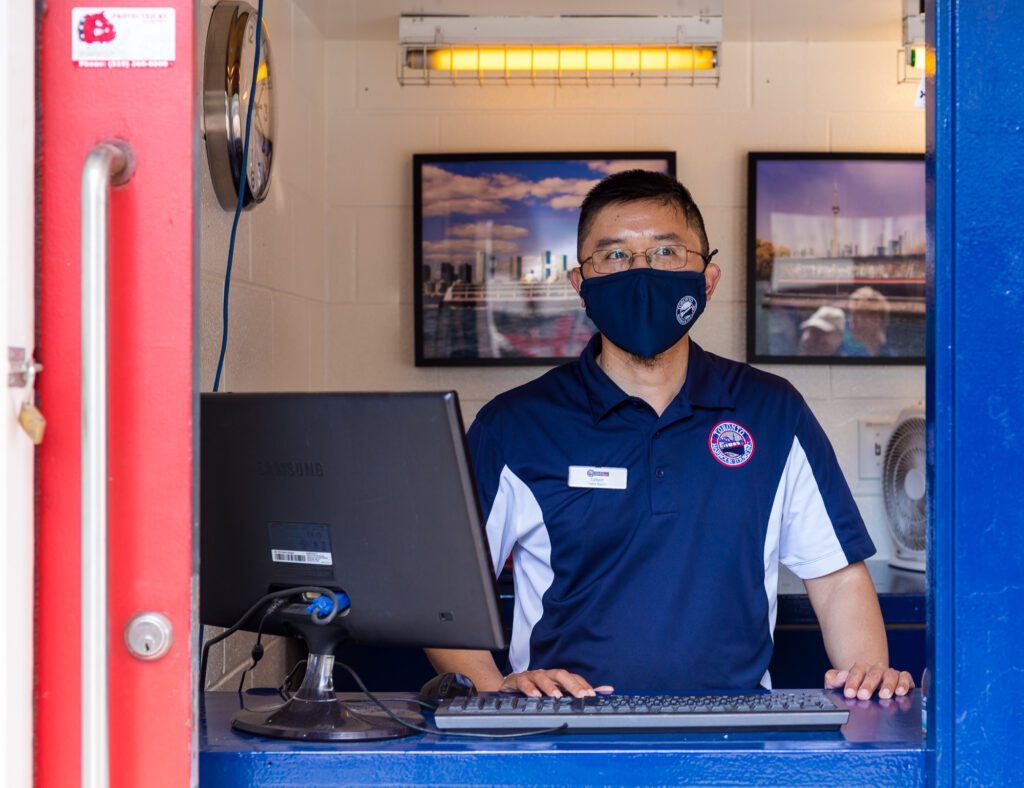 If I only have 3 hours on the waterfront, what do you recommend to do?

Our harbour tour is an hour long, so I certainly recommend that. I also suggest heading west from our location and walking the boardwalk along the water. I’ll point things out on the map along the walk depending on how much time they have.

I’ll point out Harbourfront Centre, the HTO Park, the Music Garden Park where we’ll hopefully have concerts again this summer. I explain the park design was inspired by Yo Yo Ma. I also point out the Canada Malting Silos and the potential future uses of that site, and I usually end my suggested walks by explaining Ireland Park. People are always fascinated by the statues of family members yearning for each other, and the other half of the monument is in Dublin looking back at this half. I’ve actually been to Dublin to see it.

What’s something that Toronto Harbour Tours that people may not know about?

Frequent service is what I highlight as our specialty at Toronto Harbour Tours. We have tour service in the harbour every 30 minutes when we get into the summer high season of summer. That’s our guarantee, we can always get you out on a tour of the harbour.  We may even be able to increase frequency to every 20 minutes this year with the number of boats we have now.

Since you travel a lot, what are some waterfronts around the world that Toronto can learn from?

In my travels I’ve noticed that water taxis in Toronto are the only ones that will actually take you anywhere along the water. In other cities they’re on more fixed schedules, so they’re basically water buses. I’d say that’s one place our waterfront is actually ahead of the others.

I like the Boston and Chicago waterfronts, including their museum or aquarium experiences there. But Toronto has just as much if you walk only a block or two north to Ripley’s Aquarium. Chicago’s Field Museum is about the same distance from their lakefront, but it’s more in the suburbs, so it’s the equivalent of a waterfront museum in Mississauga if it was here.

Where do you recommend people eat nearby?

I usually ask what kind of food they’re looking for. Same with attractions, I can usually narrow it down a little based on people’s interests that day. Because they’re nearby, the Goodman Pub, Joe Bird, Pearl and Pie Bar in Queen’s Quay Terminal are very popular. The Amsterdam Brewery is another regular recommendation if people are walking a little bit futher. They have a microbrewery on site, so people are very interested in fresh beer brewed on site. If they’re interested in more brewery options,  I’ll also mention Steam Whistle on Bremner, Mill Street at the Distillery, and we’re excited that Great Lakes Brewery is also opening up on the east end of Queen’s Quay this year, too.

Where can we find you in the off-season, Gilbert?

In the past, I’ve been involved through the winter with the PATH Clothing Drive. That’s led by the Yonge Street Mission each year in the Financial District, and they collect more than half of their clothing from that one week each year. Unfortunately, with the office towers not fully open during the pandemic, that work has been delayed the last two years. I’m hoping you’ll find me again in the PATH next winter again.

Thank to Gillian Wynn-Lawson for photography 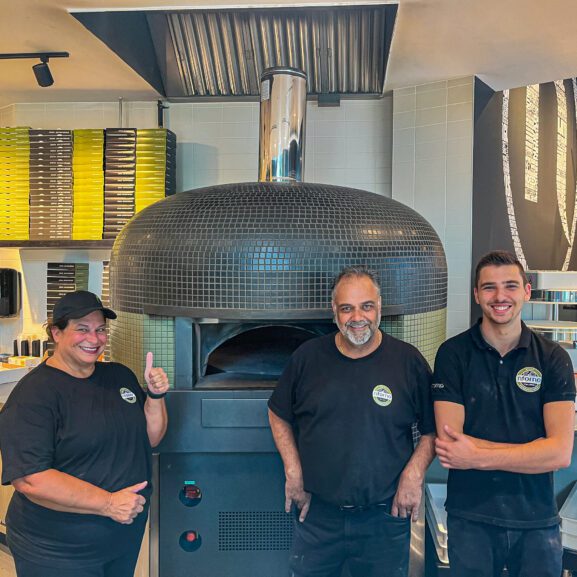 People of the Waterfront 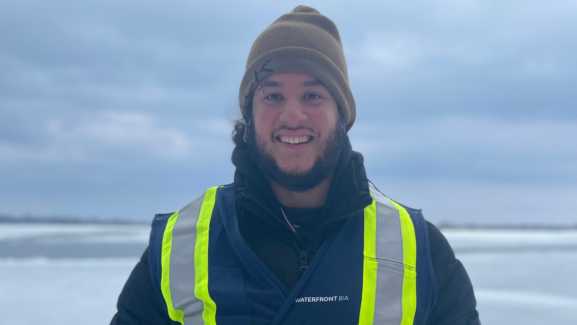 People of the Waterfront

Amir Eslah We’re back with another Meet The Neighbours blog! This segment is meant to introduce you to community members